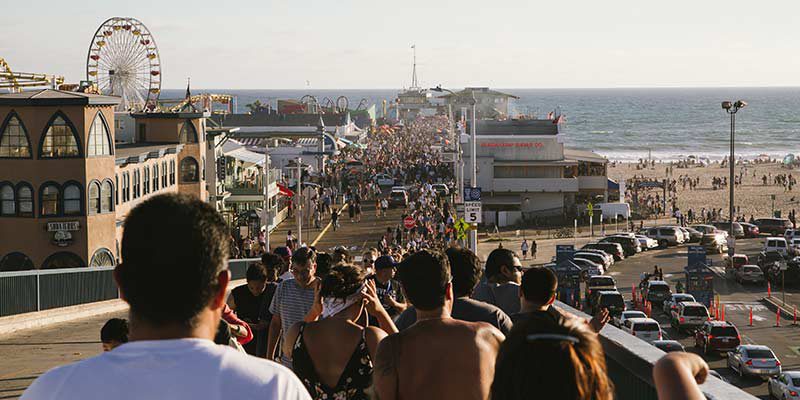 Population growth is one of the biggest environmental challenges humanity faces. Or is it? Quite often in discussions of population, growth alone is seen as the main problem. How will we feed, house, clothe ten billion people? In my own lifetime so far, the human population of the earth has more than doubled, from 3.4 billion to over 7.4 billion. Surely this is the root of our problems? Wouldn’t curbing population growth solve many of our biggest environmental problems?

Alan Weisman seems to think so. In his 2013 book Countdown: Our Last, Best Hope for a Future on Earth? Weisman argues that “the Earth can’t sustain our current numbers, and inevitably, one way or another, those numbers must come down” (p. 430). There is an awful lot to this 431-page book, and it is definitely worth reading, but the basic argument hinges on how many people can live on our planet. The human population has grown beyond the bounds of the planet to support it, and that we must take drastic measures to reduce it before Nature does it for us. This is a popular argument, and one that has been around for a long time.

Weisman’s argument is what social scientists neo-Malthusian. “Malthusian” refers to the work of Thomas Robert Malthus, who wrote Essay on the Principle of Population in 1798. Malthus, writing in England, was worried about population growth way back then, when the earth’s population was a mere 800 million. He argued that if humans didn’t control their population growth, then war, disease, and famine would. Malthus’ argument was revived in 1968 with Paul and Ann Ehrlich’s book, The Population Bomb (Ann was uncredited). The Earth’s population then was half of what it is today, and the Ehrlichs warned of mass starvations in the 1970s and 80s, with a huge increase in the world death rate, as humans would be increasingly unable to feed themselves. The argument has stayed with us and drives a lot of current environmental and social thinking.

The Carbon Map, created by the information visualizing firm Kiln, gives us an interactive, visual way to think about these issues of resource distribution and consumption. The maps show the world as we are not used to visualizing it: Countries and regions balloon or shrivel based on how much they fit a particular category. They show the world by land area, population and wealth, and the rest of the maps are divided into Responsibility (for climate change) and Vulnerability (to climate change).

It’s the Responsibility maps that reveal the resource issue, especially the maps labeled Extraction, Consumption, and Historical. The Extraction map shows CO2 emissions from fossil fuel extraction. The Consumption map shows the carbon footprint of all goods and services consumed in a nation – how much each country’s consumption contributes to climate change. The Historical map shows cumulative CO2 emissions from energy use from 1850 to 2011. This is supplemented by a Reserves map, showing the potential emissions from all fossil fuel sources still in the ground in each country.

As you click back and forth between the maps, you can compare them to the baseline Population map. What is overwhelming is how little the Extraction, Consumption, and Historical maps resemble the Population map. Now, the maps only show information related to the problem of climate change, so they don’t address overall resource distribution and consumption. But since most production and consumption is fueled by fossil fuels these days, it’s a good proxy for thinking about them. What becomes clear is that some parts of the world are overwhelmingly responsible for the vast majority of resource use. In the Population map, the ballooning areas are Asia (especially India and China), and to a lesser extent, Africa (with Nigeria and Ethiopia standing out). Switch to the Consumption map, and Africa shrivels right up, except for South Africa and Egypt. India shrinks considerably. China remains large, but the United States and Northern Europe really blow up.

This shows us that while we may think that population is the bogeyman in the closet, it’s really people’s lifestyles that matter the most. This is a hard fact to face, particularly for those of us who live in the Global North, in places like the United States and Europe, with especially high standards of living. For the last few centuries, we northerners have had a tendency to think of ourselves as the pinnacle of human civilization, and that people in the Global South (Asia, Africa, Latin America) should aspire to live like us. For the last several decades, there’s been a fear that they really will. “What if everyone in China drove a car?” “What if everyone in India lived in a middle class house?” “What if everyone in Africa had enough to eat?” It’s as if people living in the South finally made it to the dinner table, only to be told that there’s nothing left for them.

One popular way of thinking about this problem is the question of “How many earths would we need if everyone lived like people in [a country]”? So, if everyone lived like an American, we’d need close to four earths to support them. (For where this idea comes from, see this BBC article.) Interestingly, the United States is not the biggest glutton in terms of consumption; it’s the Gulf States in the Middle East. If everyone lived like Kuwaitis, we’d need 5.1 earths. It’s just that there are way more Americans—325 million compared to 4 million Kuwaitis—so as a country, we consume a lot more.

Another way of thinking about it is the idea of carrying capacity: How many people can the Earth support? Estimates of this figure vary, and, of course, depend on a lot of things, like diet and lifestyle. One estimate is that the Earth can support up to 10 billion people, provided they all have a vegan diet; with an omnivorous diet, it’s more like 2.5 billion, which we surpassed long ago. (This has to do with how much grain goes to feeding livestock in countries like the US; if the grain went directly to feed people, we’d need a lot less.)

The implications of this are important. One way to solve the “population problem” is to tackle population growth. This would involve deciding who gets to have children, and how many. Alan Weisman suggests that it won’t be pretty. But that won’t solve the consumption problem, which is really at the root of our environmental woes. There are lots of ideas about how to control our consumption, and I’ll be writing about a lot of them, so stay tuned.

Thank you, Hanifa! I’ll be posting more along those lines once I get settled in Ulaanbaatar, Mongolia, in the next couple of weeks.